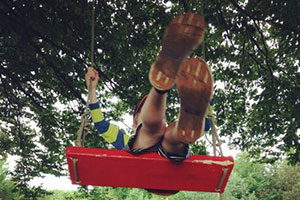 In Halifax, residents participating in 100in1Day were looking for a way to reinvigorate under-utilized spaces around the city.  Their idea: set up 12 red swings to draw people toward these spaces, spark conversation, and have a little fun in the process.

So they made it happen.  For 100in1Day Halifax, 12 red swings popped up throughout the city and they quickly became a hit.  People posted photos of them swinging on social media.

The City of Halifax started to take the swings down and sparked some backlash.  Residents loved these swings and wanted them to remain a part of their city.  City officials listened. Instead of removing the swings, they began testing them for safety to make sure they could continue to be used.

Check out the conversation on Twitter via #redswinghfx and read some of the news stories about the movement:

CTV Atlantic:  Halifax on board with mysterious red swings